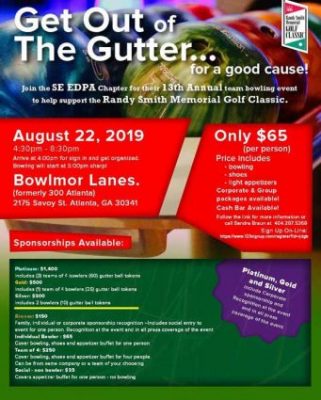 Get Out of the Gutter to Support The Randy.   The EDPA SouthEast chapter invites everyone to “Get Out of the Gutter…for a good cause,” on August 22 at their 13th annual team bowling event to help support the Randy Smith Memorial Golf Classic. Held at Bowlmor Lanes (formerly 300 Atlanta), 2175 Savoy St., Atlanta, Georgia, 30341, bowling will start at 5 p.m. sharp and bowlers are encouraged to arrive at 4 p.m. for sign-in. Price is $65 per person and includes bowling, shoes and light appetizers. Sponsorships, corporate and group packages are available and there will be a cash bar. For more info or to sign up online, visit https://southeastedpa.123signup.com/event/registration/rjdgb. For more info, contact Sandra Braun at [email protected] or call (404) 296-5282.

Las Vegas I&D EAC Workers Will Be Required to Complete OSHA 10.     Recently passed Nevada Senate Bill SP119 requires anyone working more than 15 days per year on trade shows in Las Vegas to become OSHA certified.     The bill impacts all those who perform I&D, decorating and fork lift services.  The 10 hour course (hence OSHA 10) can be taken online and the certification test is administered by state agency.  The online training is free and the certification card costs $8.

In the alternative, journeymen with Teamsters Local 631 can take the class at the Local 631 Training Center.     All those in a supervisory capacity must take and pass the OSHA 30 certification.      The monitoring of those who have completed the OSHA 10 and OSHA 30 will begin in January 2020 but the certification will not be required until January 1, 2021.

Upcoming EAC Registration Schedule   The EACA has a busy schedule of EAC registration shows coming up this Spring and Summer.  Here is the schedule for the next couple months:

On Location Expands in Las Vegas with Two New Hires    On Location has recently hired Kim Wilkins as Account Executive and William Goza as Floor Manager – both to be located in the city and part of the existing On Location Las Vegas I&D team.   Industry veteran Kim Wilkins joins On Location with more than 20 years of I&D experience, having held various positions both in sales and operations. She started as a Field Service Supervisor and was quickly promoted to a City Manager and ultimately General Manager before moving into sales as a Senior Account Executive. William Goza is newer to the I&D industry but in his three (3) short years, he has made a mark. Awarded a 2019 ACE “Rookie of the Year” earlier this year, Goza has been hired as a Floor Manager for On Location based in the Las Vegas area. He will report to Robert Morrison, On Location Regional Manager of Nevada

Nominations Open for Expo Group’s SMOTY Awards  <TSNN>  Know an incredible show manager? Now’s the time to nominate him or her for The Expo Group’s annual Show Manager of the Year awards, also known as SMOTY.   This year’s SMOTY trophies will be awarded at the TSNN Awards in Dallas, set to take place Nov. 16. Winners will receive complimentary registration and travel to the event, plus a $500 donation to the charity of their choosing.

The deadline for nominations is Sept. 13—you can submit your nominations here. You can also see a list of previous SMOTY winners, which includes managers of events with 50 exhibitor booths to more than 200 booths, by going here.

Washington State Convention Center Expansion <TSNN>  Seattle is in the midst of a growth spurt. Population-wise, the city has made the top five fastest-growing U.S. cities list for the past several years. In the past two years, eight new hotels have added 2,200 rooms to the city’s downtown area alone, according to Visit Seattle. And the Washington State Convention Center’s expansion will continue to fuel the city’s growth, opening up opportunities for mid-size conventions that are too large for the existing space.
Chicago Teamster Withdraw from Central States Pension Fund  Rob Wilson of Employco has informed the EACA that the new Teamster agreement in Chicago includes their withdrawal from the Central States Pension Fund and that they plan to start their own 401k.
Reed Exhibitions Appoints New Leadership for US Business  <TSNN>  Effective January 1, Fernando Fischer, who is the current president of Reed Exhibitions Brazil, will be moving to the U.S. to take on the role of president of Reed Exhibitions US (RXUS). In his new role, Fischer will report to Herve Sedky, president of Reed Exhibitions Americas.  Additionally, Yancy Weinrich will assume the position of COO at RXUS. She will report to Fischer and assist him in the day-to-day operation of the business, and all B2B portfolio leads will report to her

Global Exhibition Industry Growth Slows in First Half of 2019   <TSNN>  Revenue growth has slowed in the first half of 2019, compared with the same time period in 2018, according to UFI, the Global Association for the Exhibition Industry in its latest edition of its flagship Global Barometer research.    Even so, there still is an overall positive trend for the year in relation to revenue.“Exhibitions mirror markets – therefore a slowdown in global economic growth also affects the exhibition industry, as this latest edition of our UFI Global Barometer shows,” said Kai Hattendorf, UFI managing director/CEO.   He added, “But the data also proves that exhibitions are not just resilient, but show a consistently strong performance and growth opportunities in many core markets around the world.”

With regard to operating profit, 80 percent of companies maintained a good level of performance in 2018, and more than 40 percent of companies from all regions declared an increase of more than 10 percent, compared with 2017.    However, the prospects for 2019 currently are lower globally, in line with the worldwide slowdown of economic growth.